People are more inclined to head outside and get stuck into their gardens now that Spring is here with longer and warmer days.

If you are gardening and working with compost or potting mix, it’s important you know how to protect yourself from Legionella which is a bacteria found in potting mix or compost that can cause pneumonia, which can be serious and life-threatening.

“Legionella bacteria lives in moist organic material. People can catch the disease by inhaling droplets or particles in the air containing the bacteria. Gardeners are at higher risk of catching Legionnaires’ disease as the bacteria thrives in bags of potting mix and compost,” says Medical Officer of Health Dr Rachel Eyre. 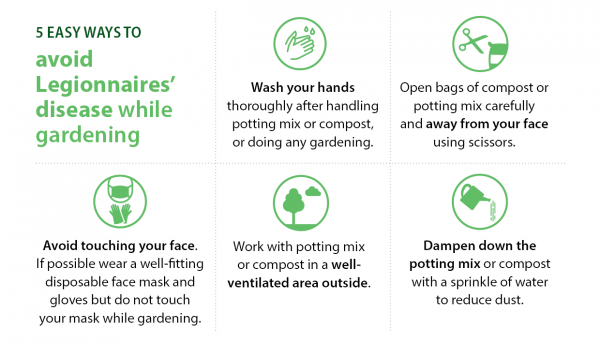 Common symptoms of Legionnaire’s disease to look out for include:

Anyone who has been handling potting mix or compost recently and is experiencing symptoms, as described above, should see their doctor immediately.

Download a poster showing the simple steps you can take to prevent Legionnaires' disease.

Read more about Legionnaires' disease with this Legionellosis information sheet.

Visit the Ministry of Health for further technical information about Legionellosis.