Margaret Norris became a nurse “by fluke” at 18 and loved it so much she’s still doing it half a century later.

The Hawke’s Bay born-and-bred registered nurse celebrated 50 years of service at Hawke’s Bay Fallen Soldiers’ Memorial Hospital this week and says the changes she has seen are: “Unbelievable.”

Having spent over three decades working for the Post Anaesthetic Care Unit and Acute Pain Service, the 67-year-old known as Marg, has seen a huge improvement in pain management.

“Back in the day it was all through tablets and intramuscular injections and now we have the options of using epidurals, patient-controlled analgesia and intravenous pain relief,” Marg says. 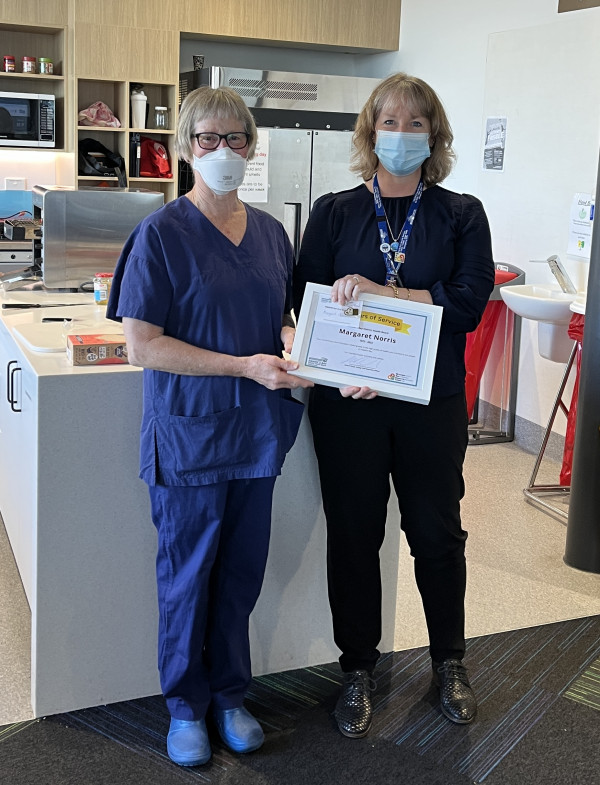 Despite her longevity it was a happy accident that Marg went into nursing.

“I didn’t know what to do and one of my friends said ‘I’m going to the hospital to talk to them about being a nurse but I don’t want to go alone’,” she says.

“Mum said ‘Just go’ so off we went and came out with a job.”

Nursing students had to live in nursing homes (“They checked our rooms at midnight”). Working at the hospital, the students covered night shifts alone with check-ins from supervisors.

Marg now has a Diploma in Medical and Surgical Nursing and Bachelor of Nursing. She has also worked in Intensive Care Unit and the surgical, orthopaedic and paediatric wards.

Other changes she has seen are: shorter operation times for cataracts surgery and tonsil removals, a “totally different” hospital layout and countless restructures of nursing itself.

“Back then people that had cataracts were fully bed bound for five days with a head bandage whereas today they go home in an hour - because techniques have changed.”

Marg’s fondest nursing memories are centred around her colleagues and patients. She recalls spending months caring for a near-death patient, and incredulously, seeing him again a decade later.

“I thought, ‘I know this patient’ and he had made a miraculous recovery.”

Her nursing colleagues have shared many laughs, something Marg believes essential for this profession.

“Young male patients who would come in with fractured femurs and would have the odd beer so we would say ‘Quick, quick! Hide your beer the Matron is coming!’ and they would throw their beer in their urinals.”

Marg celebrated her milestone with colleagues at Hawke’s Bay Hospital on Wednesday where Chief Nursing Officer Karyn Bousfield-Black presented her with a certificate and service badge. One peer said she hoped Marg would be here many more years. To her relief Marg has no retirement plans just yet.

“We’ll all be here on our zimmer frames!” Marg replied.

← Back to the Latest News

No one has commented on this page yet.